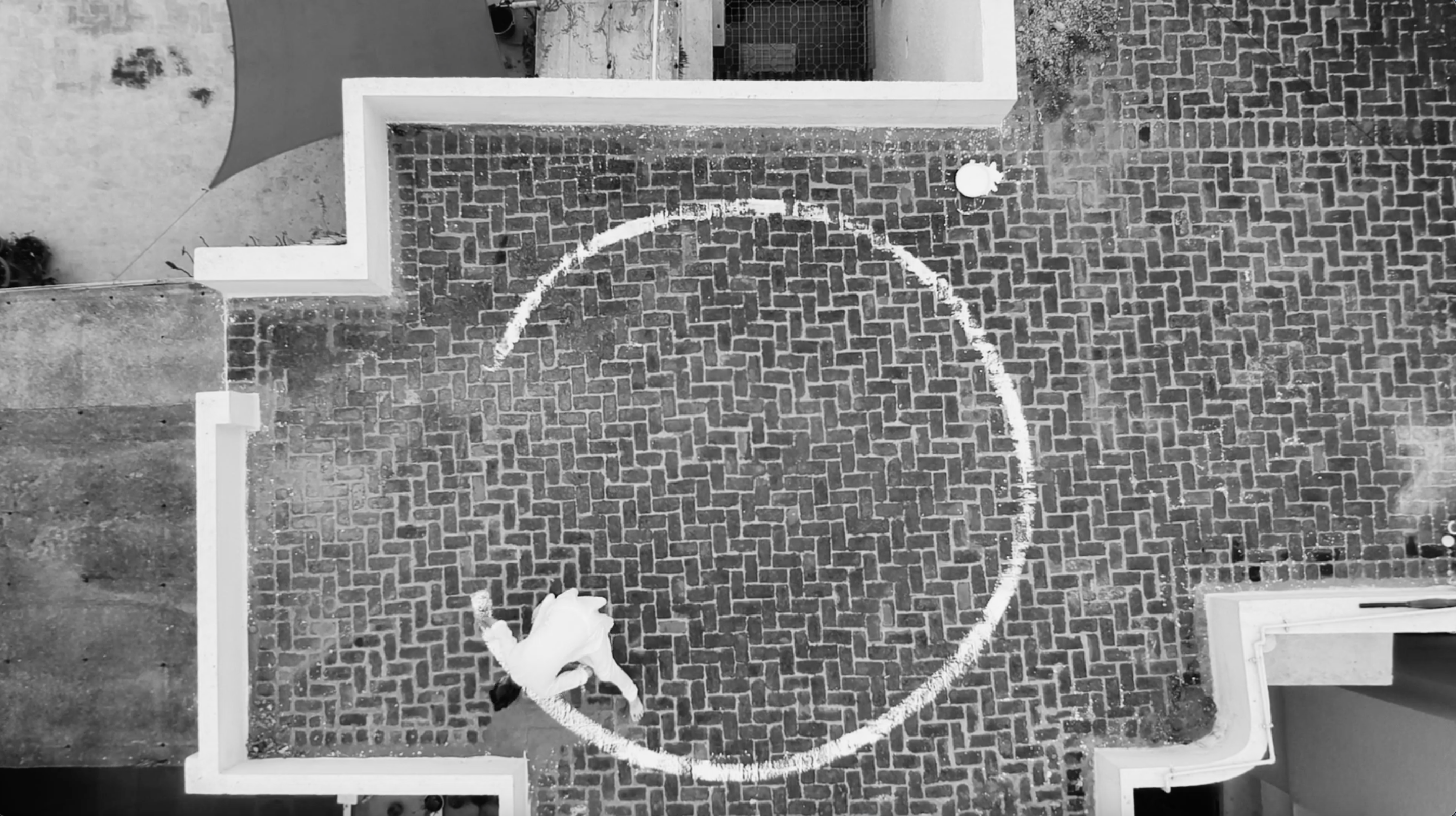 The films will be screened on a continuous loop on Fridays-Sundays in PUĀWAI – our theatre space – during normal opening hours from 20 May – 19 June.

FREE. No booking required. Drop in at any time during the programme.

Cooped is a collaboration between choreographer and dancer Jamar Roberts with musicians David Watson (bagpipes) and Tony Buck (drums). The film was commissioned by Works & Process, the performing arts series at the Guggenheim in NYC, which instigated Virtual Commissions in 2020 to support the creation of new collaborative works by 280 artists through successive lockdowns during the pandemic.

Statement by Jamar Roberts on Cooped :

This work was inspired by the release of recent statistics showing the disproportionate amount of black and brown bodies being affected by the Covid-19 crisis. In this work I set out to create an imaginatively potent fever dream that aims to capture the fear of sickness, and the anxiety of quarantine as it relates to the historical trauma of black bodies being relegated to live in and within confined spaces. Being asked to self-quarantine while politically quarantined presents a crisis within a crisis, leaving these communities the most exposed and vulnerable to the effects of the pandemic.

For hundreds of years, the black body has been a great source of controversy since its arrival on American soil. Systems of oppression embedded in American society have always cast mental, emotional and physical violence in and on the black body. I wanted to use my own body to bring visibility to an entire community of people that often go unheard and in some cases unseen. This display of the dancing black body not only peers into the psyche of marginalized people in a very specific crisis, but it is also a testament to their strength, beauty and resilience.

Jamar Roberts is the Resident Choreographer of the Alvin Ailey American Dance Theater where he also danced as a company member from 2002-2021. Roberts has made four works for the company, all to critical acclaim: Members Don’t Get Weary (December 2016), Ode (December 2019), A Jam Session for Troubling Times (December 2020), and Holding Space (May 2021). He is a graduate of the New World School of the Arts and the Ailey School and has danced for AAADT, Ailey II, and Complexions Contemporary Ballet. Roberts won the 2016 Bessie Award for Outstanding Performer and has performed as a guest artist with the Royal Ballet in London and made multiple television performance appearances. He has been commissioned by the Vail Dance Festival, BalletX, the Juilliard School Dance Division for both live and virtual works, and New York City Ballet. His next work will premiere at San Francisco Ballet this Autumn.

Tony Buck is regarded as one of Australia’s most creative and adventurous exports, with vast experience across the globe. As a drummer, percussionist, improviser, guitarist, video maker and producer, he has been involved in a highly diverse array of projects but is probably best known around the world as a member of the trio The Necks. Apart from The Necks he has played, toured or recorded with Jon Rose, Otomo Yoshihide, John Zorn, T. Cora, Phil Minton, Haino, Even Parker, The Machine for Making Sense, Lee Ranaldo, Ne Zhdall, The EX, Clifford Jordan, Ground Zero …

Larry Achiampong’s Beyond the Strata (2020) was developed in 2019 in response to an artist residency in Waltham Forest Council, East London. Working within an abandoned supermarket in Leyton, the artist created a film using the building as a means to explore the social and political issues affecting east London related to race, class, gender and gentrification. The work shows dancer Kanika Skye-Carr performing choreographed movements through the empty supermarket aisles and back spaces, enacting an insistent presence of the black body within a space that often criminalises or marginalises it. While the basis of the film was developed before the onset of Covid, the atmosphere of the work resonates with the heightened realisation of inequitable access to spaces (retail, health, social) experienced during the pandemic.

Isle of Instability (2020) is a time capsule of Cao Fei’s prolonged stay in Singapore, away from home in Beijing, during an extended lockdown. Of the experience, the artist writes that: ‘Being away from home for so long, the foreign culture has become familiar […] the labyrinth of alleys has become routine, the strangers next door have become my friendly neighbours, and I, once a guest of this country, have finally become a resident. Lost in transition, certainty has become a luxury.’ The film documents this experience of strange familiarity with everyday anxieties and new ways of passing the time, in which the creation of the artwork is a filter to ‘overcome fears and to preview unknown crises’.

Statement by Cao Fei on Isle of Instability:

It is difficult to describe what has been happening, because words to describe it are still condensing. We are currently experiencing the pain of a pandemic-influenced world. Feeling tumbled and lost, we have no choice but to confront multiple crises at once between humans and society, humans and nature, humans and development, humans and the universe.

We seem to be very adaptable and able to gradually adjust to crises of one kind or another, but we also frequently experience amnesia and tend to later forget the very cause of these crises.

My family and I have been living abroad for the past six months. One could hardly escape the pervasive virus, no matter which corner of the world one is hiding. Being away from home for so long, the foreign culture has become familiar, the exotic my daily cuisine has become my go-to delicacy, the labyrinth of alleys has become routine, the strangers next door have become my friendly neighbours, and I, once a guest of this country, have finally become a resident. Lost in transition, certainty has become a luxury.

I wander between familiarity and strangeness, homesickness and my earlier artworks are like fables, anticipating collapses in our future. I am using 'creation' to overcome fears and to preview unknown crises. But time flies, and most of us will be safely riding out the pandemic. In the future, how will we deal with the next existential threat? Will we be more united or more alienated? It seems vital to create a new mechanism in order to continue our civilization.

Perhaps we should all be grateful for the pandemic and willingly accept this sudden blow, for making people fall into philosophical confusion and start.

Cao Fei (b. 1978,Guangzhou) is an internationally renowned Chinese contemporary artist. Currently living in Beijing, she mixes social commentary, popular aesthetics, references to Surrealism, and documentary conventions in her films and installations. Her works, which often reflect on the rapid and developmental changes that are occurring in Chinese society today, have been exhibited at a number of international biennales and triennales. Major projects in recent years include a solo exhibition at MoMA PS1, New York (2016), a solo show at the Tai Kwun Contemporary, Hong Kong (2018), a retrospective at K21 Düsseldorf (2018), a solo exhibition at the Centre Pompidou, Paris (2019), a solo exhibition at the Serpentine Galleries, London (2020). Cao Fei’s recent projects include a major retrospective at the UCCA Center for Contemporary Art, Beijing (2021), and a solo exhibition at the MAXXI, the National Museum of 21st Century Arts, Rome (2021).

Setting the Stage for a Gathering of Friends

Setting the Stage for a Gathering of Friends by Himali Singh Soin and David Soin Tappeser (collectively known as Hylozoic/Desires) was made in the heart of the pandemic of 2020 in Delhi when the artist was confined to her home during a lockdown. The film revolves around an aerial view of a figure drawing a circle on the flat roof of a building. It charts the path of an Ensō, a depiction of a whole or a void, depending on the way you look at it, up-close or at a distance. This abstract gesture also signifies a future gathering, as the title of the work indicates: an imagined circle of friends in a time after the missed connections and uncertainties brought about by social distancing and self-isolation. The work proposes that patient waiting and yearning for a return to something we once felt can be a form of love.

Himali Singh Soin is a writer and artist currently who works in between New Delhi and London. Singh Soin’s interdisciplinary work focuses on the nature of identity, environmental issues, and the notion of deep time. She works across film, spoken word, performance, epistolary poetry, animation, music, and embroidery, which allows her to interweave complex concepts and narratives together. Singh Soin has performed and exhibited at the Serpentine Galleries, Dhaka Art Summit, Somerset House, Devi Art Foundation, and Performa, and won the India Foundation for the Arts Award, and the Frieze Artist Award.

David Soin Tappeser is a drummer, composer and performance artist based between London and New Delhi. His practice centres around ideas of time, interdependence and alterity. His performances and compositions use rhythm to codify, manipulate and deconstruct linear perceptions of time. They hint at intercultural entanglements, parallel histories and extra-human frames of reference. His approach to the drum set is improvisation-driven, putting strong emphasis on aesthetics of tone and dynamics. His understanding of sound, rhythm and listenership is heavily influenced by long periods spent in India, Italy, Nepal and Mexico.

VIEW ALL
No Events found.

See Other Past Events in the Gallery Archive Page