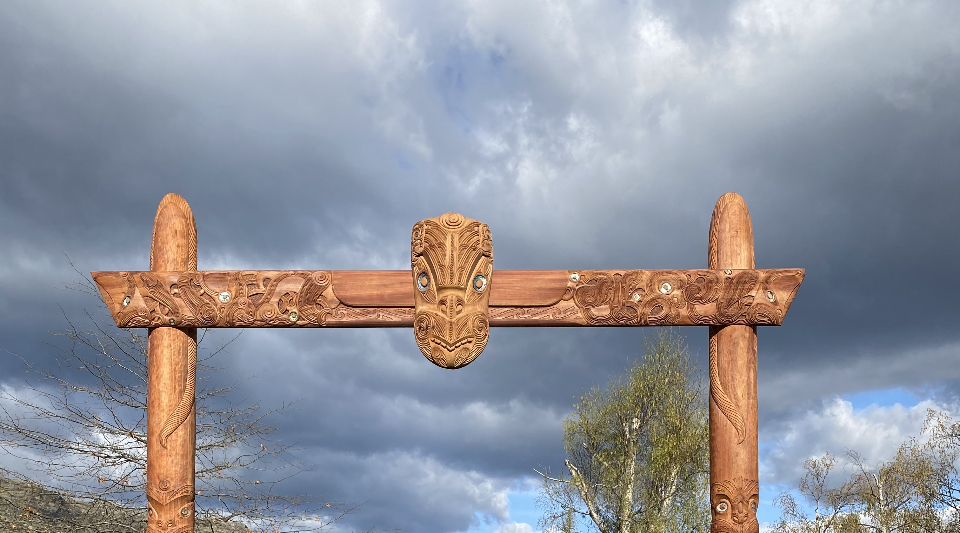 Between 14 July and the beginning of August, Te Atamira was honoured to host kaiwhakairo Steve Solomon - a wood carver from Murihiku | Southland who is currently artist-in-residence at Remarkables Park. Here is a short guide to some of the work on display.

Steve Solomon (Kāi Tahu, Ngāti Whakaue, Ngāti Pikiao, Te Whānau-ā-Apanui) is a kaiwhakairo (customary Māori wood carver) who is currently artist-in-residence at Remarkables Park Ltd. Steve, from Riverton, Murihiku | Southland, learned the art of whakairo through established mentors including his father and grandfather, who were also wood carvers. His grandmother Wini Solomon (Ngā Pūmanawa e Waru, Ngāti Rongomai) is a weaver who taught raranga, or weaving with harakeke (flax) for over 40 years, initially at the Kōkiri Centre, which she and her husband Alan, who taught carving, set up in Waihopai in the 1980s. (Wini is to receive the Queen's Service Medal for services to Māori culture and heritage in this year's Queen's Birthday Honours).

Steve completed a Bachelor of Māori Art Degree – Maunga Kura Toi (Whakairo) at the Te Wānanga o Aotearoa. During this period of study, Steve received mentoring from some of the leading North Island master carvers. He joined a team of carvers from Te Puia, Rotorua, to design and produce panels for the wharenui (meeting house) at Mataura Marae in Murihiku in 2018. With the support of Ōraka Aparima Rūnaka (Riverton iwi council) and in collaboration with master carver James York, he has co-developed whakairo wānanga (educational workshops and gatherings) to help re-establish the art of whakairo in the southern regions.

Before moving to Tāhuna, he collaborated with the Museum and Art Gallery Niho o te Taniwha in Invercargill through the Toi Māori Residency initiative, which was designed to nurture the development of contemporary Māori artists and to connect local Māori people with the rich cultural heritage and global significance of indigenous wood carving craft. Among other projects, he is currently designing work for public spaces and buildings in Remarkables Park.

Some of these works-in-progress were on display during Steve's OPEN STUDIO at Te Atamira. Below is a brief summary.

The work on display in the Open Studio was created over the past few years of kaiwhakairo Steve Solomon’s role as artist-in-residence at Remarkables Park. The first work to be installed in situ is the waharoa (gateway) depicted in this photograph (above). In keeping with its location outside Remarkables Market, the themes of the waharoa relate to mahika kai (cultivation and food-gathering sites).

The whole structure is a manifestation of Rongo or Rongo-mā-Tāne, the atua (god) of cultivation and crops. The head in the centre of the maihi (cross beam) represents Rongo and the maihi is his arms. The amo (upright supports) are his legs.

The shape of the waharoa also represents the whata – an elevated stage for storing food away from predators. The heads in the centre of each amo are tuna (eels)which are hung over the whata for airdrying. The base of the amo depicts pōhā – receptacles made of kelp and totara bark used for holding preserved birds. The patterns across the maihi allude to local birds such as weka, ruru, moa and kakapo.

Like the other works on display during the OPEN STUDIO, this work was created for the Remarkables Park site and will eventually be installed as an interior piece as part of a holistic design. It is in the form of a carved tauihu, or figure mounted on the prow of a waka (canoe).

The form of the waka references the Whakatipu region’s significance for Southern Māori as wāhi mahika kai (food-gathering areas) in relation to te ara tāwhito – the network of local waterways that are crucial for the cultivation and transportation of food. Highlighting this point, on the back of the figure is a pōhā – a bag made of kelp and totara bark chips used for carrying preserved birds in rendered fat.

This carved object is a tatā or tīheru, used for bailing water out of a waka. The form of the tatā and the red and black patterning on the handle alludes to one of the stories of Māui, the great trickster figure of Moana mythology. Māui, using the art of deception, obtains the secret of generating fire after extinguishing the fire he had taken from the finger- and toe-nails of Mahuika, atua of fire, destroying Mahuika in the process.

This piece depicts Takaroa, atua of the sea and waterways, who features prominently in Southern Māori creation stories. According to the korero that Steve tells, Takaroa was coupled with Papatūānuku (earth mother) before Rakinui (sky father) fell in love with her, fathering several children, while Takaroa was away. On discovering the betrayal, Takaroa challenged Rakinui to a battle during which he speared his rival in the buttocks, paralysing him. The defeat led to the separation of Raki and Papa.

In the more commonly told version of the story, Raki and Papa’s children were trapped in darkness between the couple and so, led by Tāne, they decided to separate their parents, revealing te ao marama, the world of light and life. In some versions of the creation story, Takaroa is described as one of Raki's and Papa's sons, rather than Papa's former lover.

This carving is designed for the interior of the research and innovation hub, which is being built at a nearby site in Remarkables Park.

In his famed battle with Raki, Takaroa may have used a spear that looked like one of the above. Rākau is the word for tree, stick, timber, wood, spar, mast and plant. It also refers to a weapon or ceremonial challenge sticks laid down at a pōhiri to a distinguished visitor. The rākau to the left of the trio is a pouwhenua – a long weapon usually made of wood with a smooth point. In the middle is a māipi or taiaha. On the right is a paiaka, which is a weapon traditionally made from a tree root. They are all made from black maire, which notable for its density and is highly prized in customary Māori carving, particularly for weapon and tool construction.

A koruru is a carved face on the gable of a meeting house. In a wharenui, this often represents a tupuna (ancestor). This example depicts the head of a ruru or little owl (similar species to the morepork), only found in the South Island.

This piece (above) is an abstract form of a kāmana, the Australasian or southern crested grebe – a distinctive diving water bird with a sharp black bill and head with a black double crest and bright chestnut and black cheek frills, which the bird uses to dramatic effect in mating rituals. It is a self-introduced bird, which breeds on the southern alpine and sub-alpine lakes of New Zealand. Māori regard kāmana as a taonga (prized treasure) species.

These poupou – carved wall figures and painted panels – represent elements of a traditional Southern Māori creation story in which Rakinui (the sky) and Papatūānuku (the earth) were separated after Takaroa defeats Raki in battle.

The central carved panel depicts Raki at the top and Papa below. On the side of Raki’s head are two of his sons from an earlier relationship – Aoraki and one of his brothers. The story of these sons of Raki are highly significant to the formation of Te Waipounamu (the South Island of New Zealand). In the story, Aoraki and his brothers left the heavens in a canoe to come down to earth to visit Papatūānuku - their father's new partner. When it was time to return to the heavens, Aoraki made a mistake in the recitation of the karakia or incantation needed to perform the journey. The karakia failed and the waka was stranded. As time passed, the brothers turned to stone and they became the highest peaks of Kā Tiritiri o te Moana – the Southern Alps.

The carved panel on the left depicts Tāwhirimātea, atua of the weather, and Rongo, atua of cultivation. The right-hand side depicts Tāne – atua of the forest. Beneath Tāne is his younger brother Tūmataueka, the atua of war, who is also connected to activities such as hunting, food cultivation, fishing and cooking.

The patterning on the painted panels represent the mountains, rivers and other elements of the local Whakatipu natural environment. 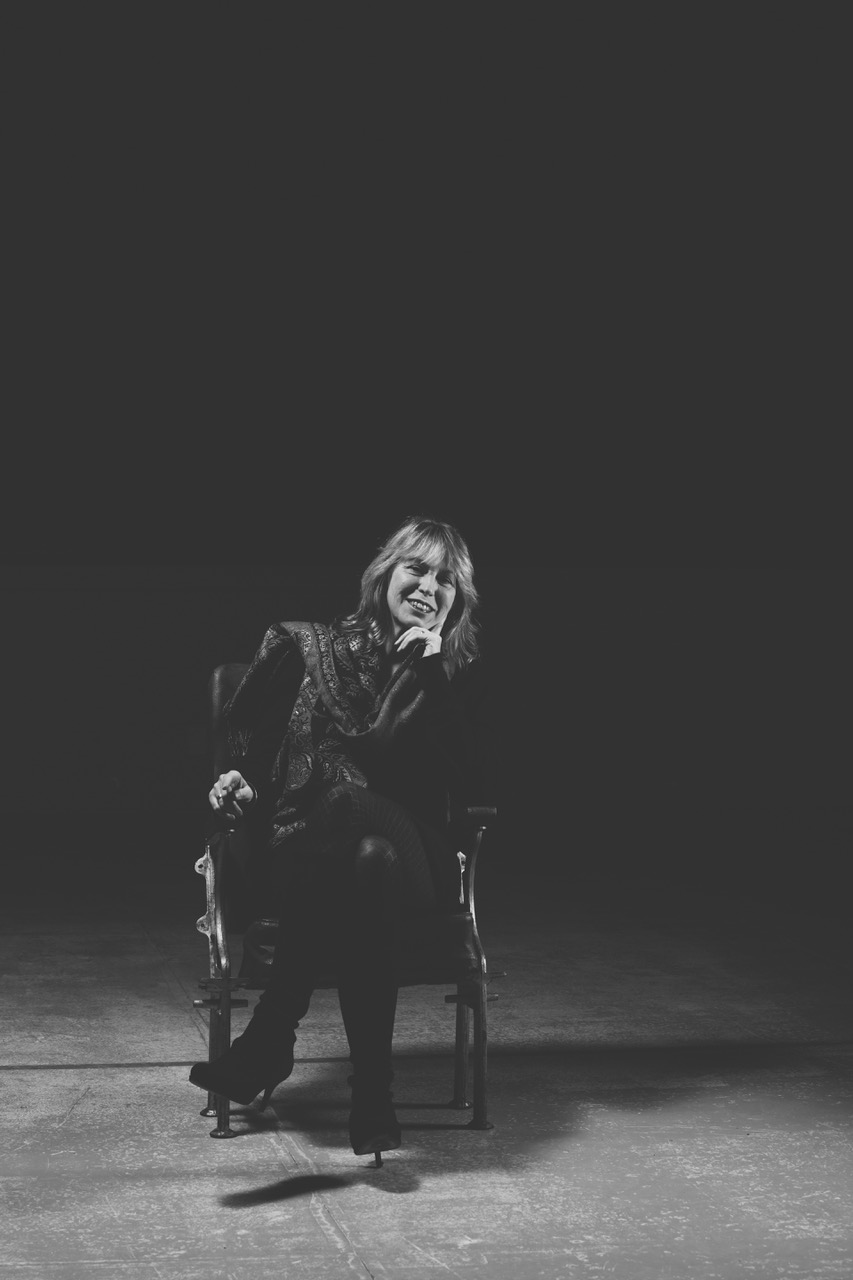 If you can cry, you can sing: Margaret O'Hanlon

Interview with Te Atamira resident artist Margaret O'Hanlon, who is a singer, teacher, choir leader, musical theatre director as well as a tireless supporter and promoter of the performing arts across the region.
August 16, 2022

An interview with Kyla Cresswell, Emma Kitson and Kim Lowe, who are showing their print-based work in the exhibition Ko Murihiku Tōku Whaea | Southern Mother at Te Atamira from 6 August – 14 September 2022.
June 28, 2022